Award ceremony to be broadcast online on NBC, CBS and ABC November 19 at 8 p.m. EST. 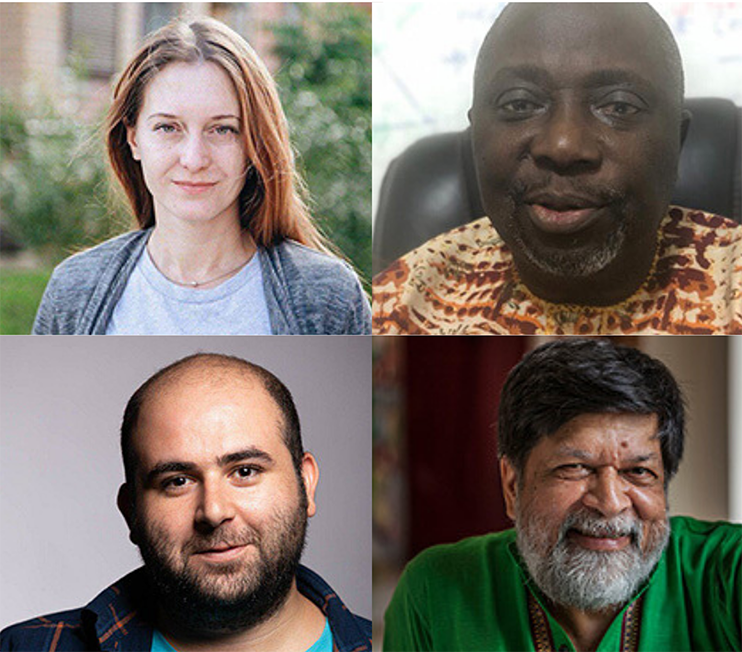 New York, Oct 27, 2020— In celebration of the resiliency of the press, the Committee to Protect Journalists will honor four journalists from Bangladesh, Iran, Nigeria and Russia who have been arrested or faced criminal prosecution in reprisal for their work. The 2020 International Press Freedom Awards mark the organization’s dedication to fighting for press freedom globally.

Lawyer and human rights advocate Amal Clooney will receive the 2020 Gwen Ifill Press Freedom Award, presented by actor Meryl Streep, a vocal supporter of press freedom. The online event will also showcase the work of this year’s awardees in a series of documentary videos streamed on multiple news networks.

“In times of unprecedented uncertainty, it’s journalists who are out there, gathering the facts and trying to help us make sense of it all. By asking tough questions, and pursuing the truth at any cost, they are essential workers – serving the public and protecting democracy,” Streep said. “That’s why I’m proud to take part in this year’s International Press Freedom Awards, and to continue supporting the vital work of the Committee to Protect Journalists.”

Hosted by NBC Nightly News’ anchor Lester Holt, this year’s ceremony will be broadcast online at www.ipfa2020.org as well as by major news outlets including NBC News, CBS News, and ABC News on November 19 at 8 p.m. EST.

In a sign of solidarity across the industry, Holt will be joined by other notable journalists such as CNN chief international anchor Christiane Amanpour, CBS News “Face the Nation” host Margaret Brennan, PBS White House Correspondent Yamiche Alcindor, and ABC News “World News Tonight” anchor David Muir, among others. The show will include calls in support of press freedom from leaders in and outside of journalism, including actor Rosamund Pike, satirical news host Samantha Bee, journalist Ronan Farrow, and former Hollywood Foreign Press Association President Meher Tatna.

Dapo Olorunyomi, the co-founder, CEO, and publisher of the Nigerian newspaper Premium Times and long-time press freedom champion; and

Svetlana Prokopyeva, a correspondent for Radio Free Europe/Radio Liberty in Russia who was convicted on charges of “justifying terrorism” in retaliation for comments she made on a radio show.

“The pandemic has posed unprecedented challenges for journalists around the world, but we are heartened to have a moment to come together to celebrate their bravery. Our awardees exemplify the dedication of so many who fight against censorship every day to bring us the news, and I am inspired by them,” said Joel Simon, CPJ’s executive director. “While hosting the event virtually is new territory for us, we’re excited by the storytelling opportunities this format affords us.”

CPJ’s Gwen Ifill Press Freedom Award is given annually to individuals who have shown extraordinary achievement in the cause of press freedom. This year’s awardee, Amal Clooney, has been a committed advocate for the rights of journalists calling on world leaders to stand up for the press. She has served as counsel for several journalists under threat and currently represents celebrated reporter and editor — and 2018 Gwen Ifill Awardee — Maria Ressa. Ressa has been persecuted in her home country of the Philippines for reporting on government corruption by her news organization Rappler. She will interview Clooney as part of the ceremony.

This year’s event is chaired by Patrick Gaspard, president of Open Society Foundations. For more information on the online gala, call Buckley Hall Events at (914) 579-1000 or CPJ’s development office at (212) 300-9021, or email CPJdinner@buckleyhallevents.com.

Media interested in arranging interviews with awardees or CPJ experts should email press@cpj.org.

U.S.-Chinese Rivalry Is a Battle Over Values